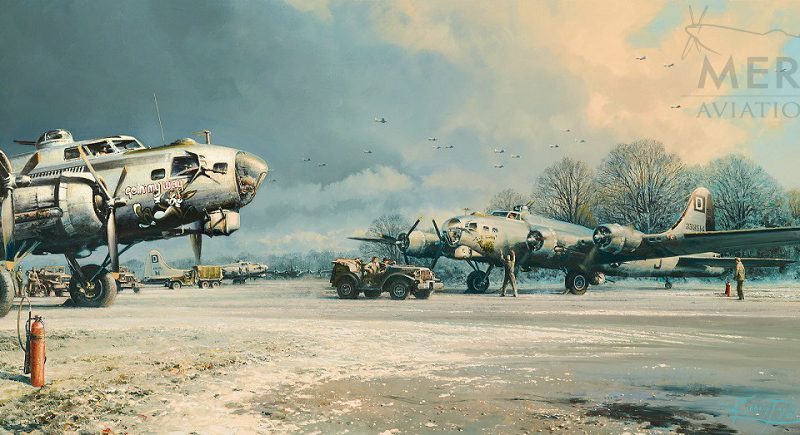 The winter of 1944 / 45 wasn’t the coldest ever recorded in England but it came close. The weather was bitter and, in what would turn out to be the last Christmas of the war, temperatures plunged across the country, bringing ice, freezing fog and deep banks of drifting snow.

Airfields across East Anglia stood bleak and frost-bound, runways kept clear of snow when conditions allowed, whilst the heavy bombers of the US Eighth Air Force remained under wraps, engines oiled, warmed and ready for any break in the banks of murky fog that would allow them to fly. And when those breaks came, the bombers were back in action ready to play their part in the final destruction of Hitler’s Third Reich. The end game was rapidly approaching and both sides knew it.

Bearing all the hallmarks of a classic Robert Taylor masterwork, this outstanding piece portrays one such break in the weather when, with recent heavy snow beginning to thaw, the B-17 Fortresses of the famous 100th Bomb Group at Thorpe Abbotts in Norfolk are being prepared for a new mission to Germany in early 1945.

Earning the nickname ‘The Bloody Hundredth’ due to the heavy losses they suffered, Robert has fittingly chosen the 100th BG to represent all those who flew so heroically with the Eighth Air Force in England during World War II.

Click this link for more information on this exciting new print