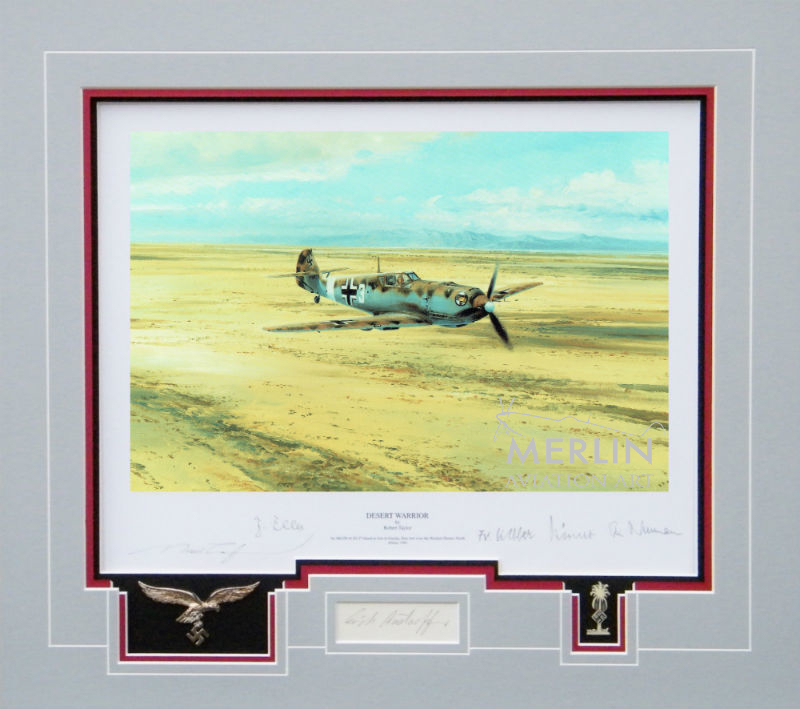 We are pleased to be able to offer the latest prints, remarques and matted Collector’s editions of Robert Taylor’s ‘Desert Warrior’.

Previously unreleased, Desert Warrior was painted in 1986, a period of his career that included some of Robert’s most famous Luftwaffe pieces such as JG-52 (1986), Ace of Aces (1988), Swansong (1988), The Abbeville Boys (1989), Stuka (1990) and Gathering Storm (1990). Robert fittingly depicts a Bf109 from I./JG27 near their base in north-east Libya, a small dusty village near the coast called Ain el-Gazala, from which they were tasked to protect the Ju87 Stukas attacking the encircled British army in Tobruk, just 40 miles away.

As with many of Robert’s early and long sold-out editions, the prints have been signed by an astonishing collection of Luftwaffe veterans which is now impossible to replicate. Included is the legendary Eduard Neumann himself, along with Aces who flew in combat with him in the Western Desert, creating a historic collector’s piece that is destined to become an instant classic.

Joining artist Robert Taylor in signing every print are four highly respected Luftwaffe Aces who flew Bf109s with JG27 in the desert:

Each signed print is issued conservation matted to include the original autographs of a further Luftwaffe Ace who flew in Africa during WWII:

With the serious collector in mind, these two very exclusive editions will include a hand-crafted original pencil drawing by Robert Taylor. Each exquisite remarque drawing will be individually created on a separate sheet of paper and delicately set into the conservation matting with all components of the Collector’s Edition to create a completely unique piece.

Limited to just fifteen copies worldwide plus ten DOUBLE remarques – with a much larger and even more elaborate drawing – collectors have the opportunity to acquire a highly sought after original work by the world’s most collected aviation artist.