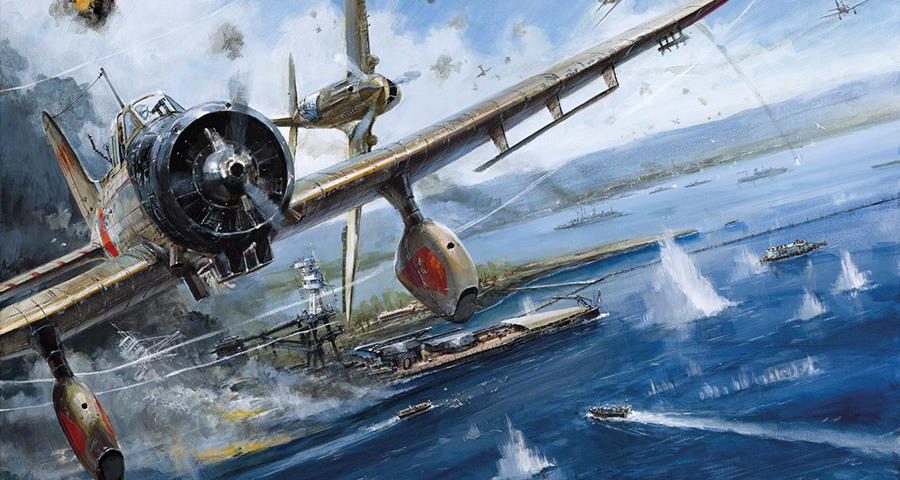 NEW RELEASE… ATTACK ON THE ARIZONA

For Americans celebrating Christmas 1941, festivities were overshadowed by war: a few weeks earlier Japan had launched their infamous, pre-emptive attack on Pearl Harbor.

On the morning of Sunday 7 December 1941 the U.S. Pacific Fleet had been at rest, battleships anchored securely with their crews preparing for a day of light duties. Above them a few clouds drifted slowly across an otherwise clear sky. America wasn’t at war, no hostilities had been declared and besides, as far as anyone knew, the nearest Japanese forces were over a thousand miles away. But they weren’t; a Japanese fleet containing six aircraft carriers had sailed in secrecy and was now less than 200 miles away. The peace was about to be shattered.

As dawn broke the first wave of Japanese aircraft launched and headed towards Pearl Harbor. They arrived just before 08.00 hrs to commence their blistering attack, concentrating on the eight capital ships moored along ‘Battleship Row’. Within minutes torpedoes were skimming the water’s surface whilst armour-piercing bombs rained down from above. Simultaneously others were bombing and strafing the island’s airfields where, caught by surprise, only six American fighters managed to get airborne and fight back.

Torpedoes and bombs sunk the California, more the West Virginia and Oklahoma. A bomb pierced Arizona’s forward magazine and it exploded, killing 1,177 of her crew. No sooner had the first wave departed than the second wave struck and the bombing and strafing resumed. In less than two hours 2,403 people had been killed and thousands wounded whilst 18 U.S. warships, including eight battleships, three cruisers and four destroyers had either been sunk or damaged. The port’s facilities had been devastated, a floating dock sunk and at the island’s airfields over 180 aircraft had been destroyed and hangars left blazing.