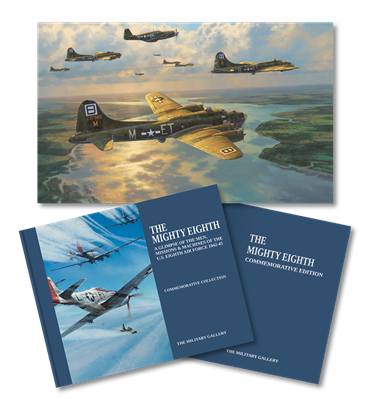 NEW RELEASE!… Back from Berlin, the book and print portfolio

128 page hardback book in its own embossed slipcase…

THE MIGHTY EIGHTH
The heroics of the airmen who served in the U.S. 8th Air Force and fought in the embattled skies of Europe during WWII are legendary. This new book provides a unique glimpse into the lives of some of the men and machines that fought in that bitter, often titanic struggle, together with some of the extraordinary missions they flew, painstakingly researched with the assistance of leading historians.

Each copy of THE MIGHTY EIGHTH in these special editions is individually numbered and supplied in its own embossed slipcase.

BACK FROM BERLIN
Exclusively commissioned for the occasion, Anthony has portrayed a group of B-17 Flying Fortresses as they make landfall over England following the Eighth Air Force’s first daylight raid to Berlin carried out on 4 March 1944.

Whilst the rest of the force had been recalled due to bad weather, two squadrons from the 95th BG, one from the 100th BG and a pathfinder from the 482nd BG pressed on towards Berlin. With their P-51 Mustang escorts from the 4th FG and 357th FG, the small American force successfully released their bombs on target despite the large presence of Luftwaffe fighters over the German capital.

Back from Berlin! the book and print portfolio