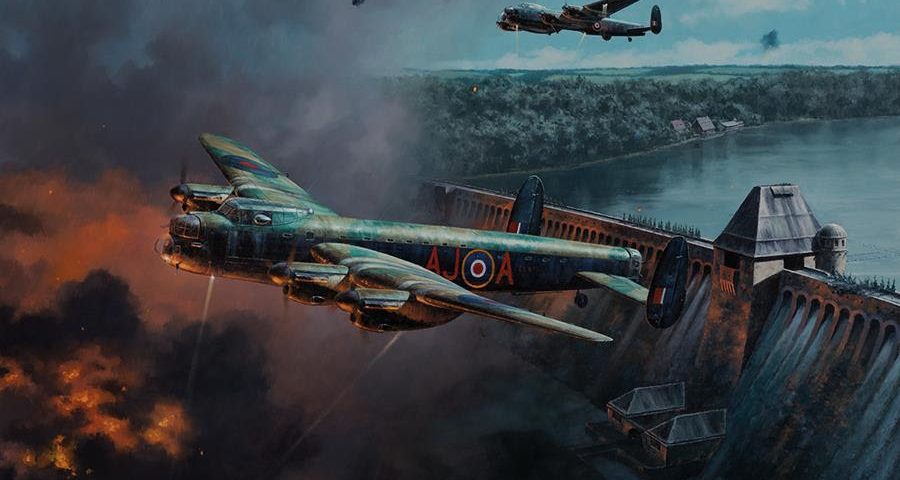 Twenty minutes had passed and three Lancasters had attacked but there was still no sign of a breach in the Möhne Dam, the first of three primary targets for the newly- formed elite 617 Squadron under the command of Wg Cdr Guy Gibson. Gibson and Flt Lt ‘Mick’ Martin had made successful attacks but Flt Lt ‘Hoppy’ Hopgood, whose bomb bounced over the dam wall and exploded on the power station below, had been shot down by deadly flak. Now it was the turn of Sqn Ldr ‘Dinghy’ Young in Lancaster AJ-A. With Gibson and Martin heroically drawing enemy fire, Young’s Upkeep ‘bouncing bomb’ was spot on target with Gibson later noting it made ‘three good bounces’ before detonating against the dam wall. It held but Gibson was feeling upbeat, he was sure he’d seen movement in the wall after the explosion and called up David Maltby to begin his attack. He, too, was successful, and just as Flt Lt David Shannon was about to begin his attack the dam disintegrated – the Möhne had finally been breached. ‘There was a great breach 100 yards across’ Gibson wrote later, ‘and the water, looking like stirred porridge in the moonlight, was gushing out and rolling into the Ruhr valley…’.

An hour later the Eder dam was also breached, but the operation was a costly, if stirring, success; of the nineteen Lancasters sent out from RAF Scampton, eight would never return; of the 56 aircrew aboard only two survived.

To perpetuate the legend of the Dambusters, artist Anthony Saunders has once again created a stunning work depicting the scene at ‘Target X’ – the codename originally given to the Möhne dam. Always a master of his craft, Anthony portrays ‘Dinghy’ Young’s Lancaster AJ-A as he clears the dam wall moments after releasing his bomb. On his starboard side Guy Gibson, navigation lights ablaze, heroically draws enemy fire whilst below Young, the inferno created by Hopgood’s bomb lights up the sky.