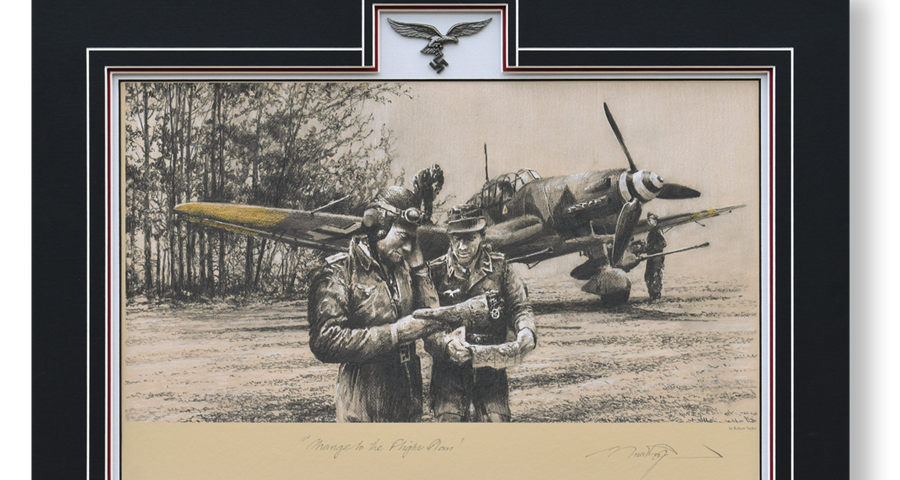 NEW RELEASE… CHANGE TO THE FLIGHT PLAN by Robert Taylor

Only SEVENTEEN copies of this memorable edition are available worldwide! With a tank-busting Ju87G Stuka behind him re-armed and ready for action, Oberst Hans-Ulrich Rudel, Geschwaderkommodore of SG2, identifies some last minute changes to the flight plan during the concluding months of 1945.

On 1 January 1945 newly promoted Oberst Hans-Ulrich Rudel, commanding officer of Schlachtgeschwader 2, stood before Hitler. He was about to become the first and only recipient of Germany’s highest award for gallantry, the Knight’s Cross with Golden Oak Leaves, Swords and Diamonds, and the most decorated German serviceman of the war. Amongst those present to witness the historic event were Reichsmarschall Hermann Göring, Field Marshal Wilhelm Keitel, Chief of the Supreme High Command of the German Armed Forces, his deputy Generaloberst Alfred Jodl, and Grand-Admiral Karl Dönitz, Commander-in-Chief of the Kriegsmarine.

Rudel was not a typical Luftwaffe Ace. Seeing action exclusively on the Eastern Front, he was primarily a Stuka pilot responsible for destroying over 500 Russian tanks, 150 pieces of artillery, some 800 enemy vehicles and four armoured trains along with the destruction of a Russian battleship, a cruiser, a destroyer and 70 landing craft. In addition to numerous bridges, bunkers and roads demolished he and his gunner claimed over 50 aerial victories. His flying career encompassed a record-breaking 2,530 combat missions in which he was shot down by ground fire over 30 times. His list of wounds included the amputation of his right leg below the knee in February 1945 yet, not to be deterred, he returned to combat flying just six weeks later.

Alongside his impressive record as a Stuka dive-bombing Ace, Rudel would pioneer a new lease of life for the ageing Ju87, developing it into a formidable ground-attack tank- buster by equipping it with two 37mm flak guns slung under the wings. It is one of these Stuka tank-busters that forms the backdrop to Robert Taylor’s detailed drawing Change to the Flight Plan, a compelling masterpiece depicting Rudel during the final months of the war.