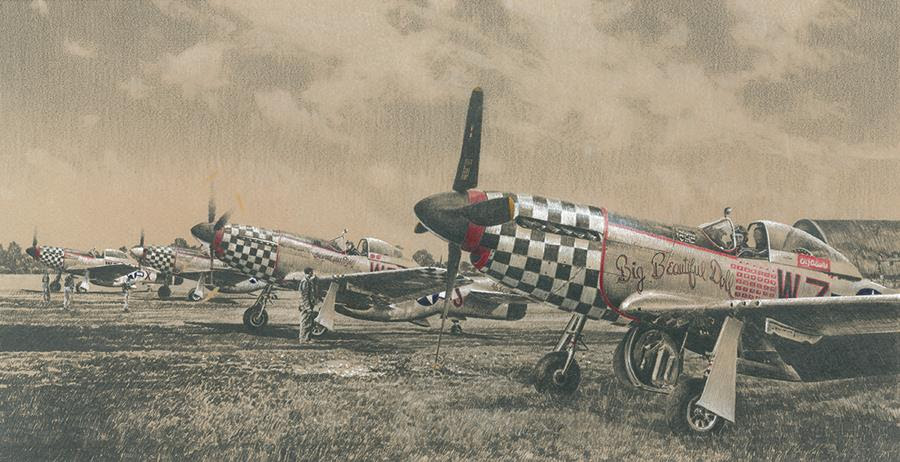 NEW RELEASE!… Eagles of the Eighth by Richard Taylor

By the end of 1944 thousands of sleek, long- range, sparkling silver P-51 Mustangs of the U.S. Eighth Air Force were prowling ever deeper into Germany, seeking out the remnants of Goering’s once-fabled Luftwaffe. For the past year the P-51s had been at the sharp end of the fight but now they dominated the sky, achieving complete combat air superiority over the Reich. The Mustang had been transformed into one of the most potent weapons of the war.

But this outstanding machine could never have achieved such a status without legendary men to fly them – and the Mustang pilots of the ‘Mighty Eighth’ were among the best in the world. Men such as George E. Preddy, John C. Meyer, ‘Bud’ Anderson, ‘Kit’ Carson and Don Blakeslee; not forgetting Robin Olds and Chuck Yeager, the great Clyde East and many others.

Plus men like Colonel John D. Landers, CO of the 78th Fighter Group and main subject of artist Richard Taylor’s stunning contemporary work Eagles of the Eighth. The picture relives a moment during the spring of 1945 in which he and his men are about to start engines and head out from Duxford to strafe targets of opportunity in Germany. Colonel Landers notched up an impressive 14.5 victories – including a share in a Me262A which he achieved flying his P-51D Big Beautiful Doll, whose markings are well known to enthusiasts at air shows across the world.

Eagles of the Eighth