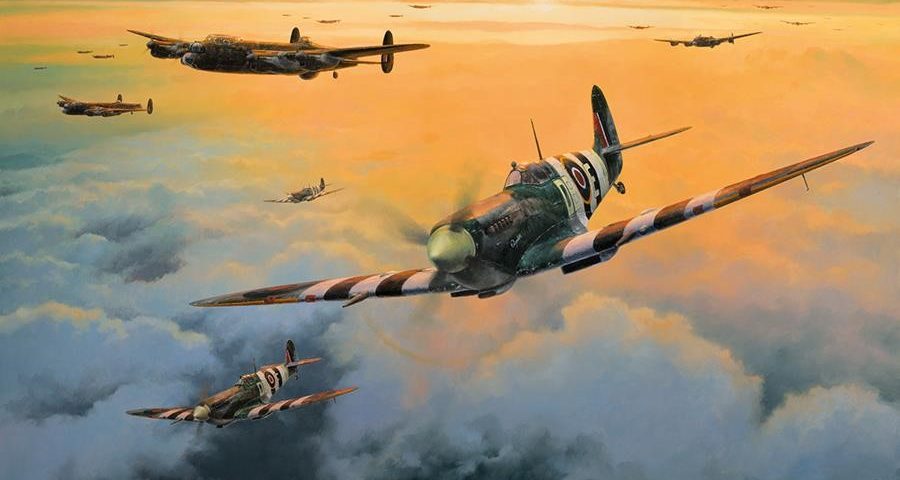 Elizabeth had a brief but exciting wartime career, or, more precisely, Mk.IX Spitfire NH341 did. She’d arrived gleaming and fresh on 12 June 1944 at the makeshift airfield B4 located at Beny-sur-Mer a couple of miles inland from Juno beach and liberated by Canadian troops on D-Day.

The squadron receiving NH341 was 411 (Grizzly Bear) Squadron RCAF and it wasn’t long before her first pilot, Flt Lt A.B. ‘Bruce’ Whiteford, had named her Elizabeth after his wife.

Less than 48 hours after her arrival and adorned with full black and white invasion stripes, Whiteford was at the controls in the late afternoon of 14 June as Elizabeth set out on her first combat mission as the squadron helped to escort a force of over 220 Lancasters on a raid to bomb the heavily-defended docks at Le Havre harbouring German E-boats.

This is the scene beautifully depicted in Anthony Saunders’ compelling painting Escort to Normandy which is now available as a superb artist-signed limited edition print to commemorate the efforts of all allied airmen on D-Day and throughout the Normandy Campaign. The raid on Le Havre was Bomber Command’s largest daylight raid of the war so far with Leonard Cheshire’s 617 Squadron dropping their Tallboys moments before the main force arrived. Whiteford, who would fly Elizabeth on more missions than anyone else, described the operation as ‘bags of flak and fire’.

Eight other pilots besides Whiteford flew Elizabeth on her 27 combat flights over Normandy and one of them, Flt Lt H.C. ‘Charlie’ Trainor DSO DFC, scored two air victories in her, both against Bf109s. Flying another Spitfire Trainor gained ‘ace’ status on 4 July when he destroyed two more Bf109s but that was two days after Elizabeth had sadly met her end – or had she?

On 2 July 1944 whilst being flown by W/O J.S. ‘Jimmy’ Jeffrey, Elizabeth was attacked by an Fw190 during an engagement south-east of Caen. With oil covering his windscreen, Jeffrey was forced to bail out but landed unscathed near the small town of Orbec. Hidden by farmers and the local Resistance, ‘Jimmy’ Jeffrey was soon reunited with his squadron but what became of Elizabeth?

She’d crashed, obviously, yet despite her ordeal a significant amount of her still remained – enough to be put on display, first at the Musée Mémorial de la Bataille de Normandie at Bayeux and later at the Canadian Juno Beach Museum at Courseulles- sur-Mer.

In July 2015 Elizabeth arrived at Duxford to undergo restoration to flying condition and this time reconfigured as a two seater. Elizabeth’s colour scheme, markings and equipment, however, mirror NH341 exactly as she was when flying with the brave Canadian pilots of 411 Squadron.

Today she forms the backbone of premier flight experiences with Aero Legends where her two seat configuration allows enthusiasts the opportunity to experience life in the cockpit of perhaps the most iconic British aircraft in history – a Supermarine Spitfire.