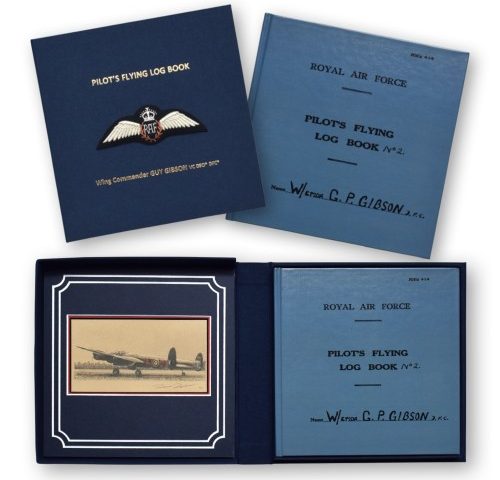 Presented in its own luxury embossed presentation box with an ORIGINAL PENCIL DRAWING by Richard Taylor and specially printed Certificate of Authenticity.

Established in 1975 the Military Gallery is the world’s leading publisher of aviation and military art. Representing many of the finest artists in the industry and pioneering the genre, it’s with unrivalled pedigree that the Military Gallery breathes new life into such a classic item as this stunning reproduction of Wing Commander Guy Gibson’s ‘Pilot’s Flying Log Book No.2’.

Officially licensed as a faithful reproduction of the original, which is held in the Public Records Office in London, only a limited number have ever been produced. It covers the period from 15 November 1940, with the first written entry an ‘aileron / elevator test’ on a 29 Squadron Blenheim, and records all of his subsequent flights up to the ‘air test’ of a P-38 Lightning on 16 September 1944. Three days later, on 19 September, Gibson was killed piloting a Mosquito over Holland. For Dambuster enthusiasts, however, the most important entries are those leading up to and including the mission that took place on the 16 / 17 May 1943 – the night he led the Lancasters of 617 Squadron on Operation Chastise, the legendary raid for which his leadership and conspicuous bravery led to the award of the Victoria Cross.