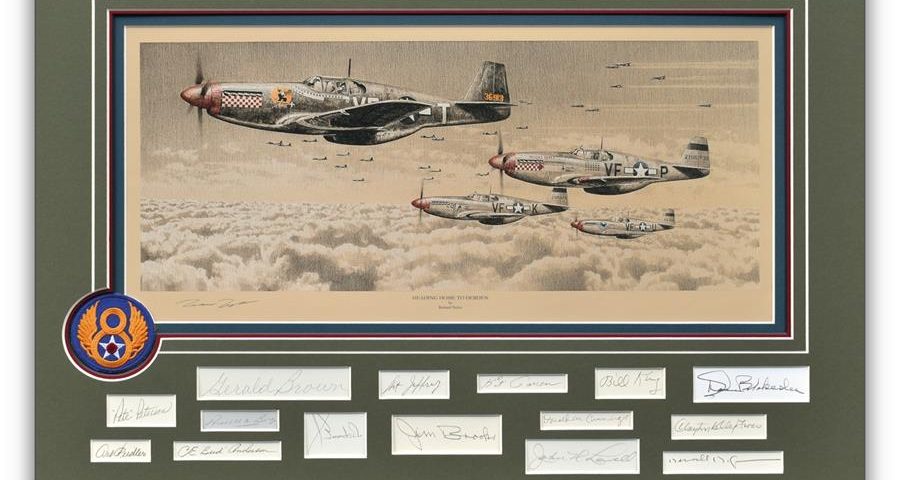 Just FIFTEEN copies of this memorable edition are available worldwide!

Formed at RAF Debden on 29 September 1942 from the RAF’s three American ‘Eagle’ squadrons, the Fourth Fighter Group – known thereafter as ‘The Debden Eagles’ – were the oldest fighter group in the Eighth Air Force and destined to be the USAAF’s highest scoring group of the war with a total of 1,016 enemy aircraft destroyed. On 28 July 1943 they were the first fighter group to penetrate German air space, the first to engage enemy aircraft over Paris, the first to escort bombers to Berlin and led the first ‘shuttle’ mission from England to Russia.

In his stunning tribute, Richard has fittingly chosen to depict Captain Don Gentile – the man described by General Dwight D. Eisenhower as a ‘one man air force’ – and pilots of the 4th Fighter Group to represent all the brave airmen who flew the P-51 Mustang in combat during the Second World War. Gentile is shown leading a group of pilots from the 336th Fighter Squadron home to their base at Debden in March 1944. Flying his personal P-51B, VF-T ‘Shangrai-La’, he is followed by his close friend and wingman Johnny Godfrey, the group’s third highest- scoring Ace.