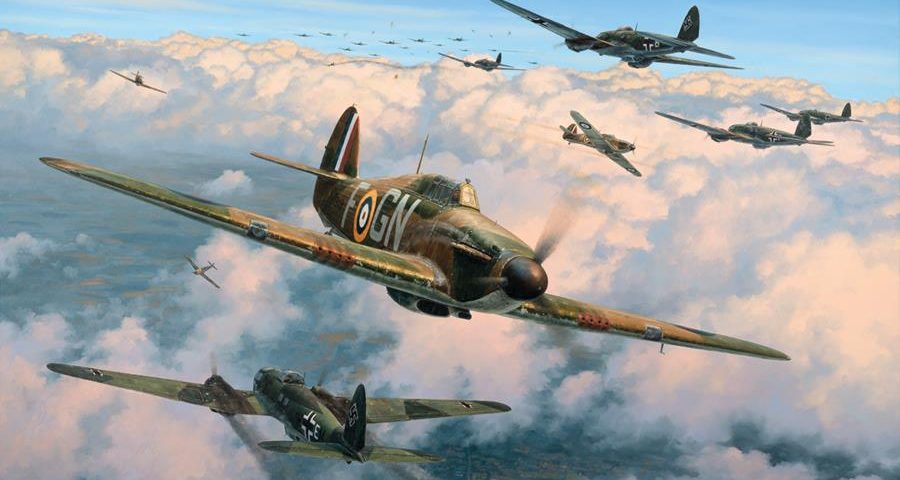 Flown by some of the top Battle of Britain Aces such as Douglas Bader and Peter Townsend, the Hawker Hurricane, unlike its faster, thoroughbred companion the Spitfire, was a go-anywhere, do-anything, tough-as-old- boots warhorse. Sturdy to fly and resilient under fire, the Hurricane may have lacked its companion’s finesse but, seen at its best, it wrought havoc in the massed formations of Luftwaffe bombers pummelling southern England during the long, hot summer of 1940. By the end of the week, culminating on Sunday 16 September, the Luftwaffe finally had enough; their massed daylight attacks had been routed. Between the beginning of July and the end of October, eight out of ten enemy aircraft destroyed had fallen victim to the guns of a Hurricane.

Shown centre stage in Anthony Saunders’ outstanding painting is one pilot who knew the Hurricane as well as anyone – Battle of Britain Ace Tom Neil. Flying Hurricanes with 249 Squadron from North Weald, the artist puts the 20-year old Flight Lieutenant in the thick of the fighting, some 15,000 feet south-east of London on Wednesday 11 September 1940.

Describing the action as he powered his machine head-on towards the enemy bombers Tom Neil recalled the ‘surging excitement mixed with apprehension. The thick line bombers …… advancing towards us. Slowly. Inexorably. Aiming directly for the City. Thirty? Forty? Fifty? Who knew? Too many, anyway. No beam attack this. Straight for them. A head-on attack…!’. With adrenaline coursing through his veins the young pilot focused solely on the next few seconds because things were ‘going to be difficult. Everyone pushing, squeezing. Then firing! The line of Heinkels growing magically in my windscreen. My guns ripping and shuddering. Lines of sparks and smoke streaking ahead…….Watch out! I was forced to pull away, shrieking expletives. Then, it was all over’. Within seconds he was through the pack and falling away, ready to climb and attack once more, this time having the satisfaction of forcing a Heinkel down to crash-land in a field below.