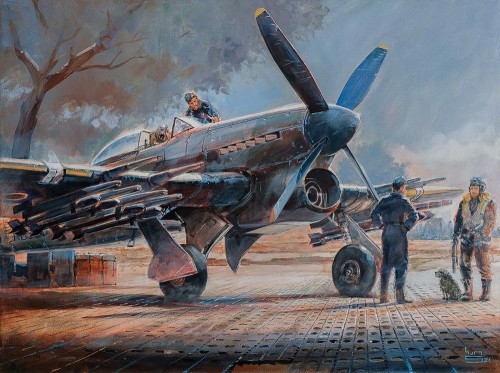 – The Mighty Hawker Typhoon –
Few aircraft compared to the rugged Hawker Typhoon in its role as a deadly air-to- ground attack aircraft during the Second World War, with its place in history forged in the savage skies of Normandy following the Allied landings on D-Day. When the once all-conquering Panzer divisions threatened to halt the advancing Allied armies, the Typhoons were there to turn the tables on the enemy, unleashing their deadly cannon and rocket-fire on anything that moved. General Dwight D. Eisenhower, Supreme Allied Commander, spared nothing in his praise; the ‘chief credit in smashing the enemy’s spearhead’ he wrote, ‘must go to the rocket- firing Typhoon aircraft of the Second Tactical Air Force’.

In his exciting painting Preparing for Action, award-winning artist Keith Burns gives us a fine depiction of a Typhoon from the 2nd Tactical Air Force, refuelled and re-armed, preparing for another death- defying, low-level mission to strike fear and destruction into the enemy.