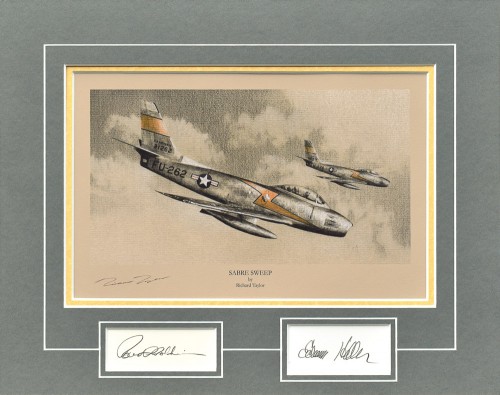 F-86 Sabre fighters of the 1st Fighter Group’s 94th Fighter Squadron, the first squadron to be equipped with North American’s revolutionary swept-wing jet. The F-86 would go on to become the USAF’s most successful front-line fighters during the Korea War.

The creation of Edgar ‘Ed’ Schmued, the same man who designed the P-51 Mustang, the near supersonic F-86 Sabre was the USAF’s first ever swept-wing jet fighter and their primary front-line fighter in Korea. Entering service in 1949 with the 1st Fighter Group’s 94th Fighter Squadron it would become one of the finest jet fighters of the Korean War with an impressive kill ratio over the Soviet designed MiG-15s. All but one of the 40 American fighter pilots to achieve Ace status in Korea did so in an F-86.