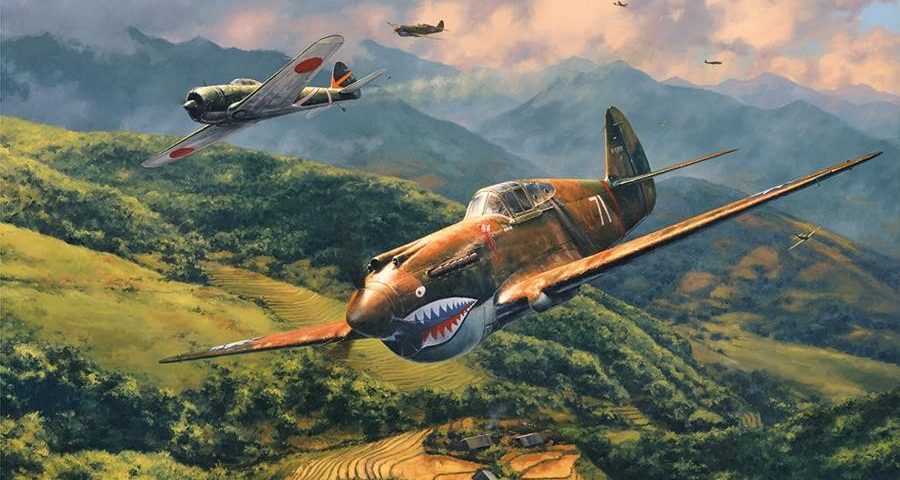 Formed in the months before Pearl Harbor by veteran U.S. aviator Claire Chennault, then a recently-appointed brigadier-general in the Chinese Air Force, an intrepid band of buccaneering American pilots and ground crew volunteered to fight against the Japanese in China. Officially named the 1st American Volunteer Group (AVG), they would soon become known more simply as the Flying Tigers.

By 1941 Chinese forces, having been at war with Japan since 1937, were struggling. Strangled by a Japanese blockade of their ports they were left with a single lifeline through which to receive supplies from the outside world – the infamous Burma Road, a tortuous trail hacked through the jungles and mountains linking south-west China to the port of Rangoon. With the Imperial Japanese Air Force determined to bomb the trail into oblivion, the task of stopping them was given to Chennault’s Flying Tigers.

Heavily outnumbered with seldom more than 50 or 60 serviceable P-40s once intended for the British, and always starved of spares, the Flying Tigers went into action for the first time on 20 December 1941 over Rangoon, and with great air battles raging over Christmas the Japanese quickly got the message – they were in for the fight of their lives. Over the next few months of the AVG’s brief but glorious existence, their three squadrons were credited with destroying nearly 300 Japanese aircraft with probably an equal number damaged.

Seldom had a unit achieved so much, so quickly and with so little. The AVG had become one of the most famous fighter units of all times and created a legend that will live long in the annals of air combat history but, having blazed their way into glory, on 4 July 1942 Chennault’s tiny ‘air force’ ceased to exist, amalgamated into the U.S. 23rd Fighter Group.