As this canvas has been professionally framed, our usual post and packing rates do not apply. Please contact us to discuss shipping options before purchase.

December 1944 and the Reich is steadily crumbling. In the skies over Germany the raids by Allied heavy bombers continue unabated; the Americans by day, the RAF by night. But even as the Germans retreat, the intensity of the fight never diminishes.

Lancaster Under Attack – one of Robert Taylor’s most famous and collectible paintings – depicts a scene typical of the perils endured by the bomber crews. An RAF Lancaster of 626 Squadron takes evasive action as a Messerschmitt Bf110 G-4 night-fighter makes a potentially deadly pass beneath the bomber, during a raid over Osterfeld in the heart of Germany.

In this powerful and classic image both crews are locked in a desperate close- quarter battle as they bid to outmanoeuvre each other. The Lancaster, hampered by damage to its port wing and aileron, dodges its way through the darkness, taking care not to collide with other bombers, while the Bf 110 pilot dives away to avoid the stream of tracer from the Lancaster’s front turret. The contest could go either way.

Carefully crafted onto fine canvas, each of these crafted Giclée Proofs are fully authorized and signed by Robert Taylor, hand-numbered and issued with a Certificate of Authenticity.

As this canvas has been professionally framed, our usual post and packing rates do not apply. Please contact us to discuss shipping options before purchase. 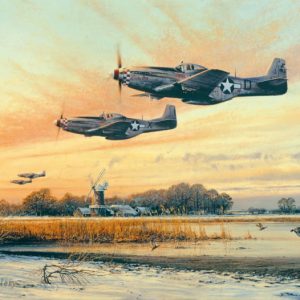 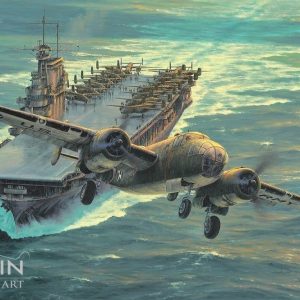 EAGLES OF THE NORTH (Remarque) 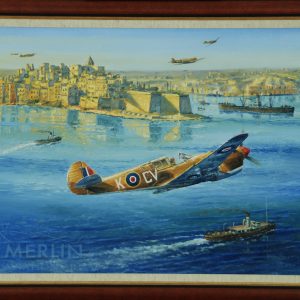